They say that crows usually mate for life.  George and Mabel have certainly stuck together through good, and some very bad, times — so, in honour of Valentine’s Day, here is their story.

I wrote about some of their trials and tribulations about a year ago in the blog post George’s Tough Year. This is the next installment of their story.

In spite of babies lost to illness  and a seemingly catastrophic injury, George has kept on keeping on and, with the help of his mate, Mabel, seems to be thriving.

We never did figure out what exactly caused George’s beak to break. Theories have included: crash landing; attack from other birds; and a run in with a rat trap. I don’t think George is going to tell me any time soon. In any case, I hardly think he notices his half-beak any more.

He’s developed his own method of scooping up food, turning his head upside down for a more efficient “shovelling” action.

You would think that other crows would take advantage of George’s disability, but he and Mabel, as a team, are a force to be reckoned with. While George comes down to pick up their breakfast, Mabel stands guard on a higher roof and warns of incoming interlopers.

Mabel fixes me with a stern gaze, just in case I’m about to cause any problems

George’s great advantage over other crows is that he’s not afraid of me at all. If I’m present, the other crows are too afraid to come and eat, while George regards me as his personal catering manager. If I forget one of his “snacks” he will perch right by my studio and stare meaningfully at me through the window until I get the message.

In 2015 they had a baby but s/he was terribly afflicted by avian pox and died as soon as the cold weather came. Last summer I watched carefully to see what would happen. They had two babies. One didn’t make it, but the second is hanging in there. Boy/Girl George, as I like to call him/her has a small foot deformity, but has survived a bitterly cold winter, so fingers crossed.

George and Mabel are working incessantly to make sure their offspring thrives. After George has collected the food I put out (and he can cram an amazing amount into his gullet and beak) he flies off to share the bounty with Mabel and the baby. I think George is trying to show Junior the food collecting ropes, but s/he remains skittish about coming too close for now. 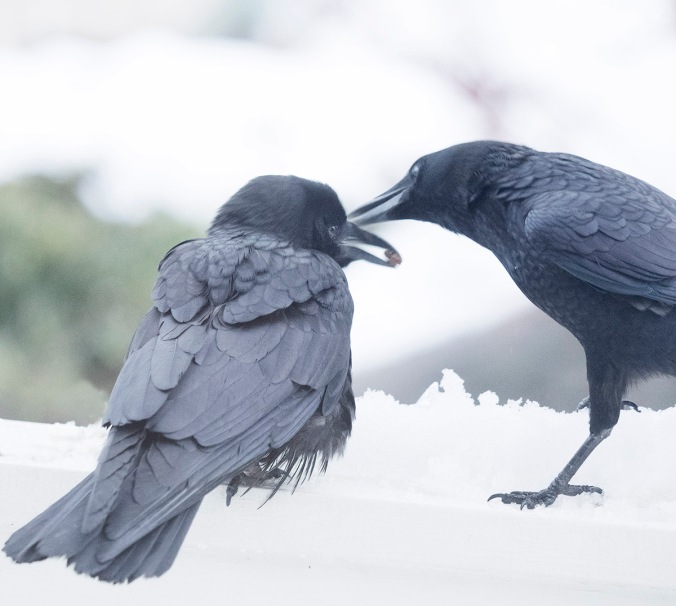 So this Valentine’s Day, we can celebrate the many kinds of love. From the giddy excitement of first infatuation, to the less dramatic but lifelong kind that George and Mabel enjoy. 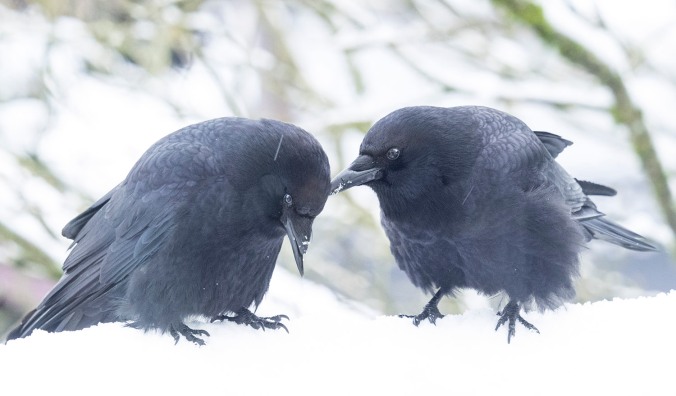 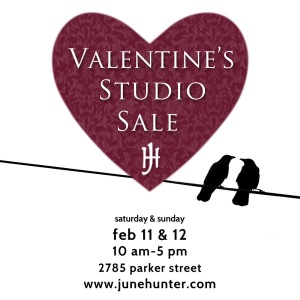 I have a crow family outside my balcony and every year they repeat the exact same process of having babies and teaching them to fledge. I find their behaviour very interesting and watch them for hours at a time. I live in Vancouver but before Imoved here I lived in Burnaby and watched the crows from my livingroom window. Every morning they would fly by and head for different parts of th city only to return every night to the rookery about two miles down the road where thousands of them spent the night. I like to sometimes feed the one from my balcony with peanuts, they just love them. So thank you so much for sharing your wonderful story with the world, I wish you peace and good health for the rest of your days. ROBERT

What a lovely story, beautifully told. Your photos are great too. Can you put me on your mailing list for shows of your work or is Parker St. the only venue? Thanks.

Loved you story of George and Mabel. I feed many birds but have been unable to attract crows (and I’d love to have some). One day I did observe a crow at the end of my driveway burying something and take great care and time with the job. When he left I went to check on what the job was about. It was a small piece of pita bread. Hardly worth the extensive operation it took to hide it. Not much of a story, but all I have to share.

I LOVE crows and have a few of your wonderful pictures! Please add me to your email list! thanks, Kye Hughes
laughingplace@bellsouth.net