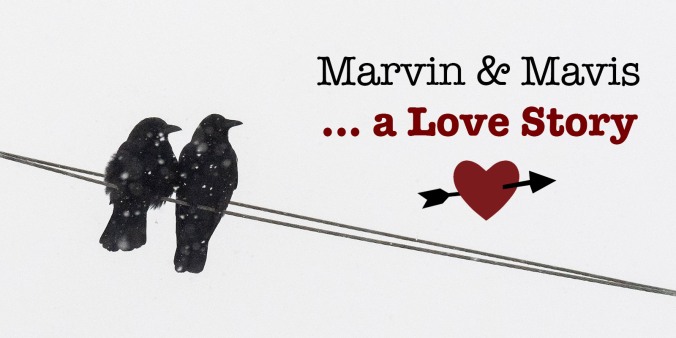 Crows make it look as if they have the world by the tail. When the dark river of them flies over to the nightly roost, they look powerful and untouchable.

In her poem, Crows,  Mary Oliver describes this view of them:

glossy and
rowdy
and
indistinguishable.
The deep
muscle of the
world.

But that anonymous crowd, like all crowds, is made up of many individuals, — each with their own challenges, and their own story.

This is story of the special bond between just two of those many crows — Marvin and Mavis. 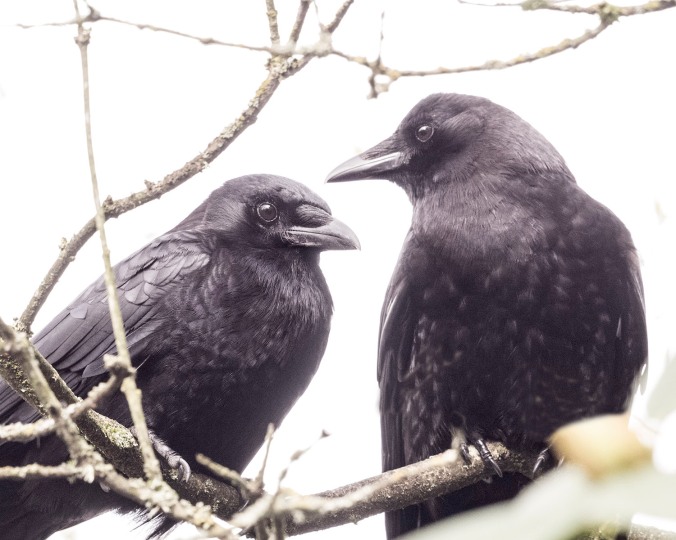 They first appeared in my garden around the time we lost George Brokenbeak. George’s mate, Mabel, stayed in the neighbourhood, but moved over a block, leaving my yard with a “vacancy for crows” sign on it. Marvin and Mavis had already been hanging around, so they were quick to move in and become fixtures. It seemed to me that they were a young couple, just starting out together.

Every time I look outside I scan the sky for them. Most of the time, when I can see them, they’re together. If they’re not, one of them is making that “I’m over here. Where are you?” call to check in. 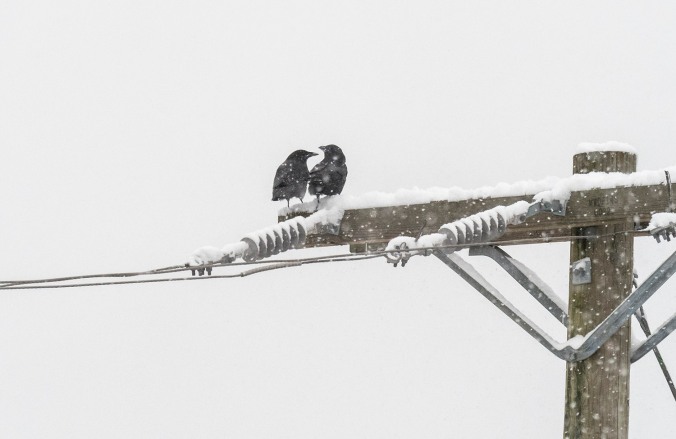 Like most crow couples,  their thoughts turned to nest building last spring. They took on the task with gusto, scouring every tree for just the “right” twigs. 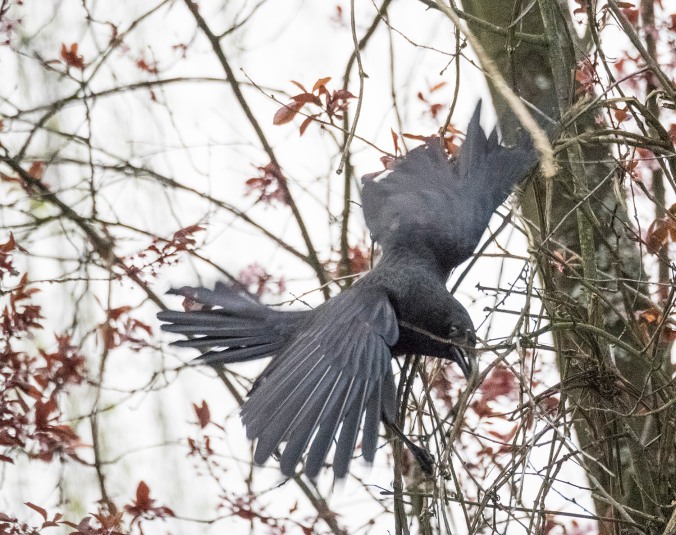 They made one “decoy” nest first and then settled on the real nest site in April. 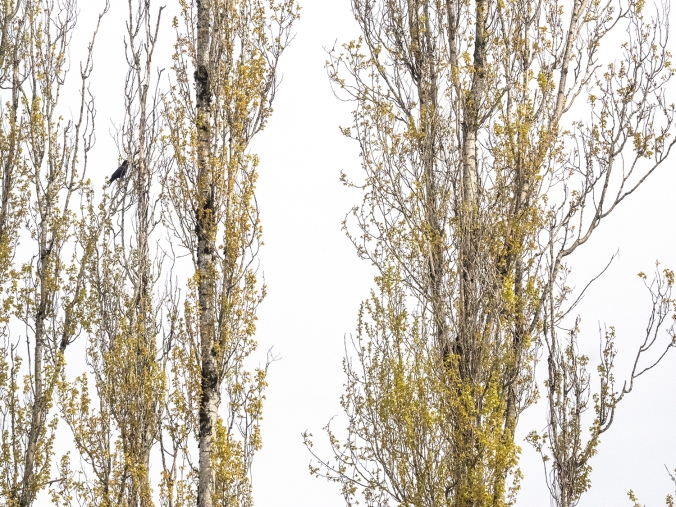 Marvin watches over the nest — which is nestled in the crook of one of the poplars in the lower right side of the picture.

They worked so hard. They’d be there when the sun went down, forgoing the nightly trip to the roost to guard the nest and its contents, and they’d be back at it at dawn.

Weeks went by and the trees leafed out, making it harder for me to see what was going on up there. One day though, I could tell something had gone wrong.

Mavis left the nest and kept staring at it in confusion. Shortly after, I found their fledgling at the foot of the poplars. It had fallen from the nest and didn’t survive.

They grieved their loss for many days, spending a lot of time just sitting in the trees near the nest, as if hoping the baby would reappear. 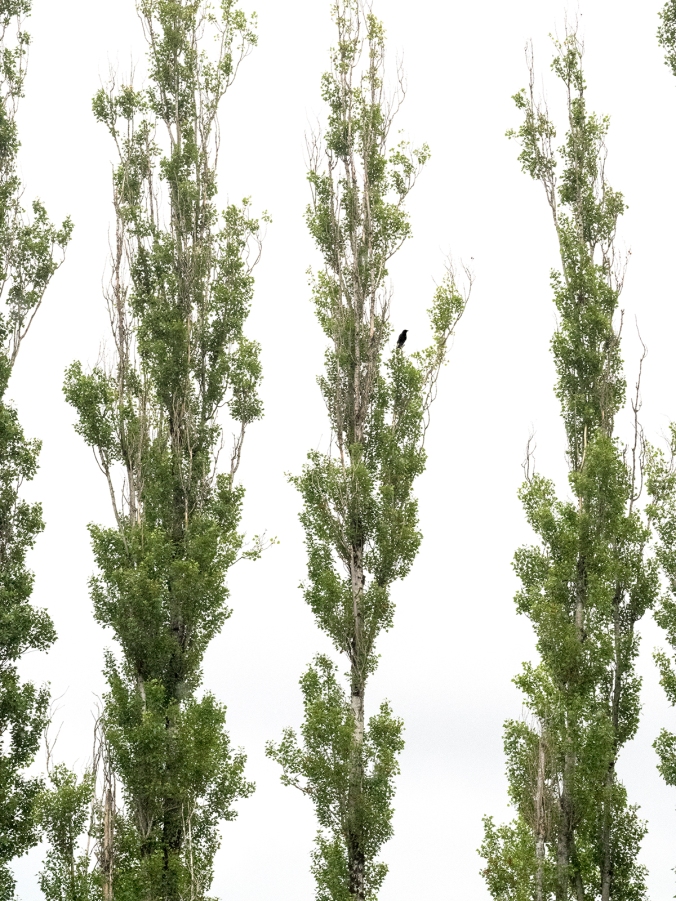 Marvin spent a lot of time comforting Mavis, who seemed to have forgotten how to look after herself.

Gradually they picked up the pieces  and went back to their pre-nesting pursuits — going to the roost at night and guarding their territory by day. 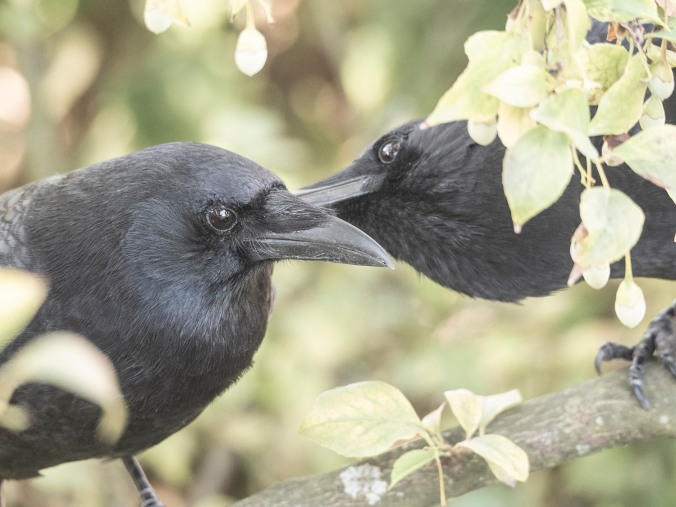 The summer was hot, dry and smokey from nearby forest fires, so just keeping cool and hydrated was a challenge. 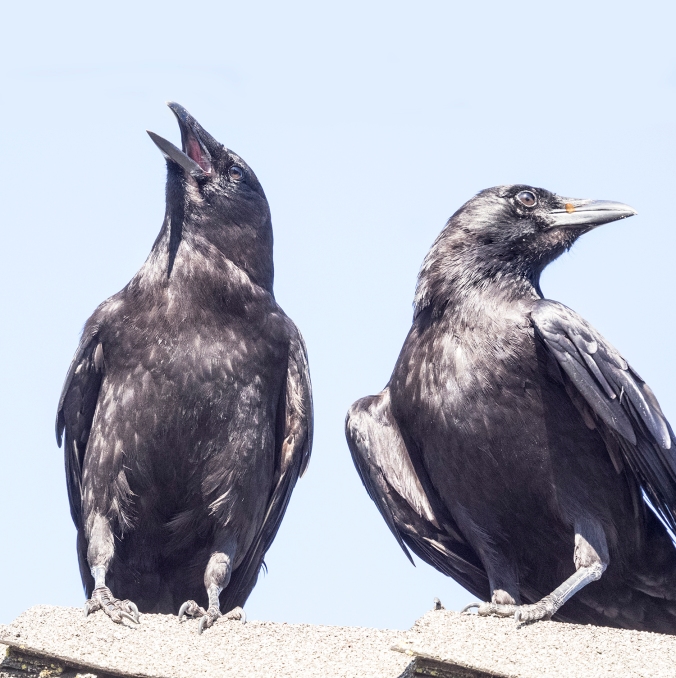 I have never seen our local crows in such a bedraggled state … and for such a long time. It seemed to start in early August and go on well into October.

Mavis, at one point, had lost so many neck feathers, she looked partially decapitated. 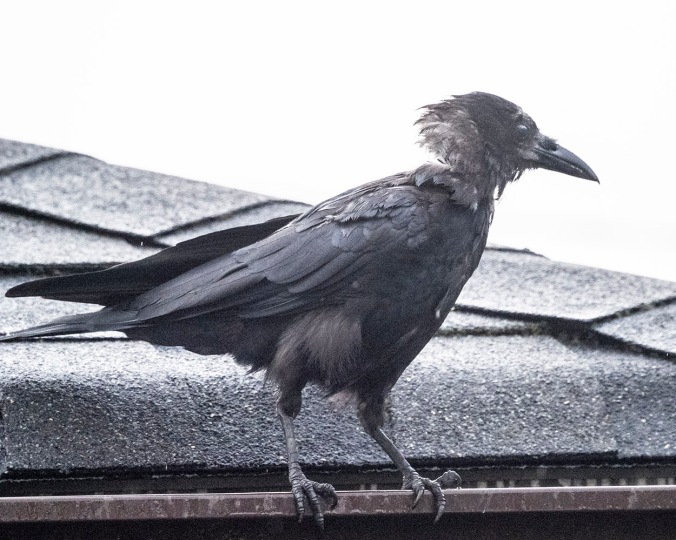 Marvin lost all his nostril feathers. 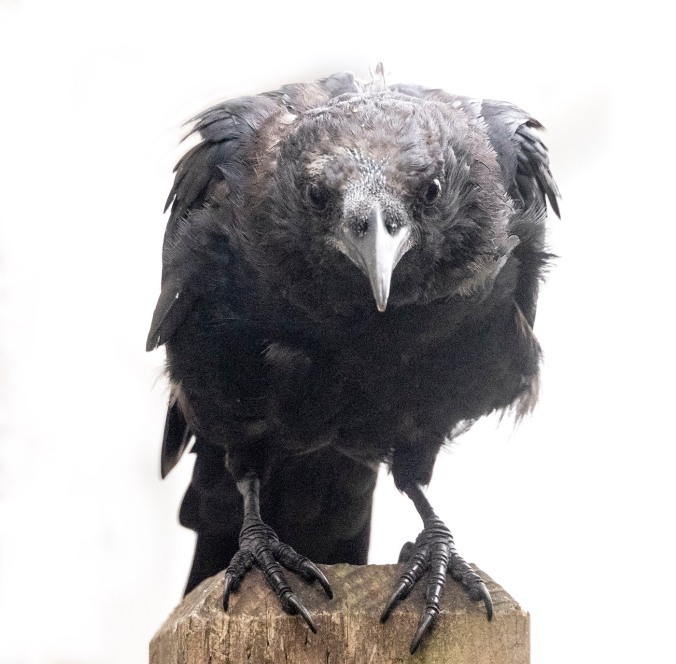 They looked objectively terrible, but Marvin and Mavis didn’t seem to care.  They may, for all I know, have giggled a little at the sight of each other, but their devotion remained unwavering. 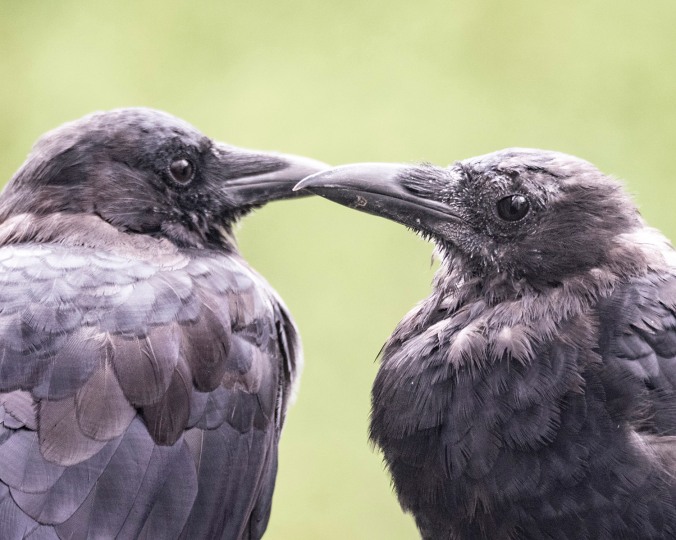 The new gleaming feathers did eventually come in, of course, and by late October they were their well groomed selves again. 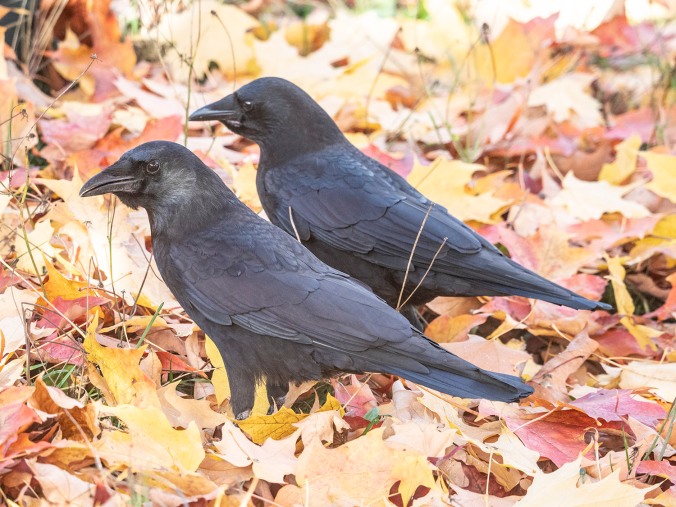 Just in time for winter! 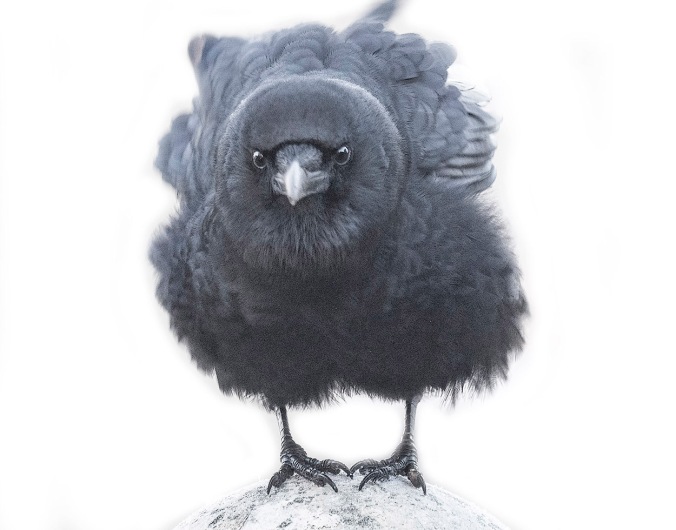 Which brings us to their latest challenge. In December I noticed a small growth on Mavis’s left foot. It’s avian pox, a virus that can spread and cause disability or death. Luckily, in her case, it seems to be not too serious and isn’t spreading. I make sure to put out extra nutritious food for her to keep her immune system in tip top shape. 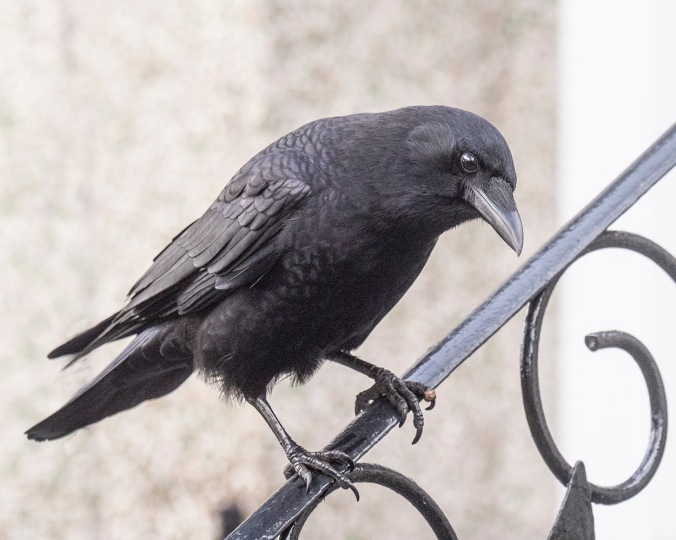 Marvin seems to know she needs all the help she can get and he seems quite happy to let her shove him out of the way to get her share of food.

Their nest from last year is still tucked into the poplars, currently blanketed with snow. I hope that, once spring finally arrives, they’ll start checking out the neighbourhood for new real estate options and give the nest building another try. 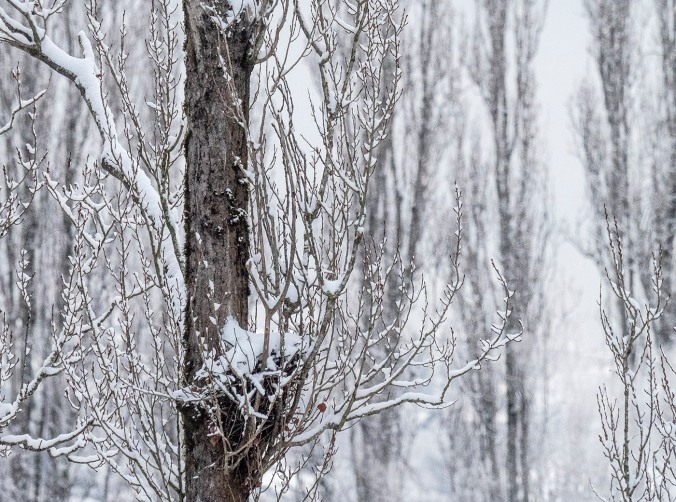 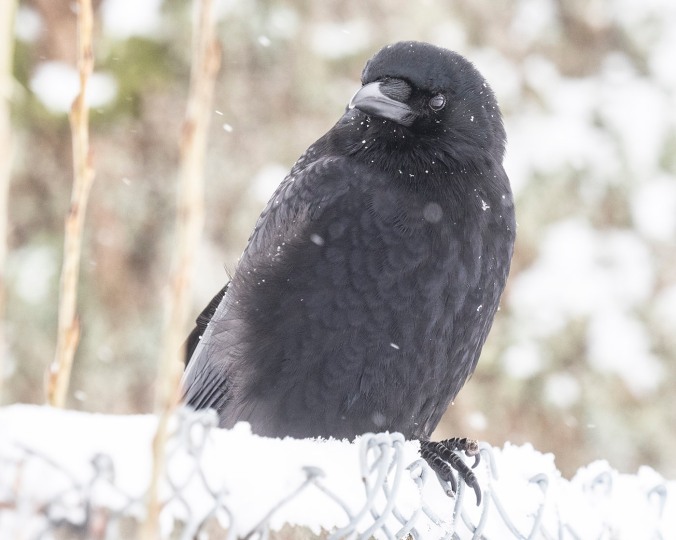 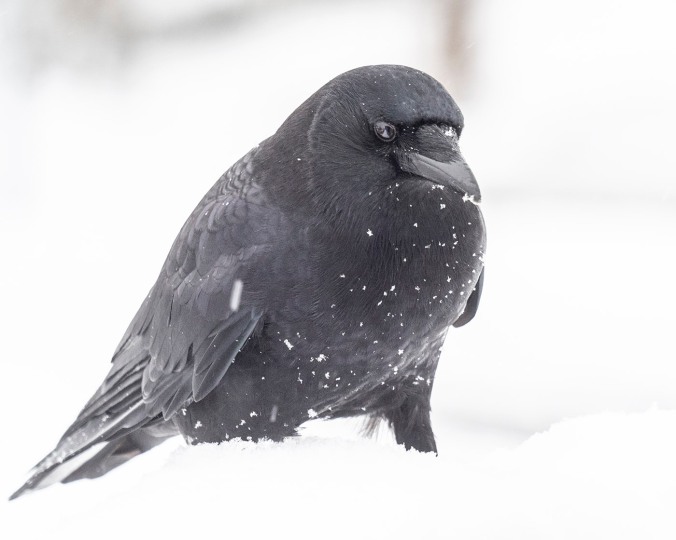 I’m pretty sure that Mavis will not expect roses this Valentine’s Day.

It’s unlikely that they’ll be making reservations at a fancy dumpster.

But they watch out for one another, they comfort each other in hard times, they keep each other warm in the cold, and they refrain from laughing at each other when they look like avian zombies — and, really,  isn’t that better than chocolates in heart-shaped boxes?

But a love song is always nice. Here, Marvin sings one, accompanied by our neighbour’s furnace sounds. 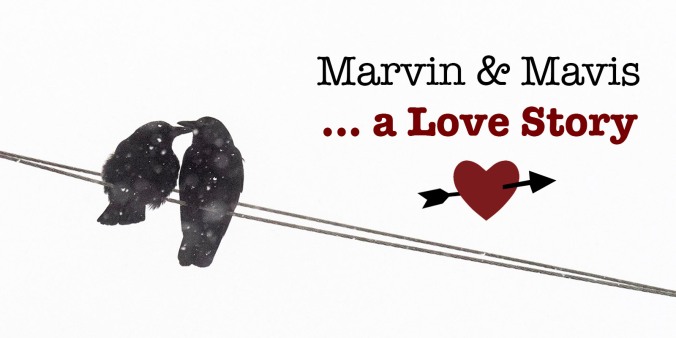