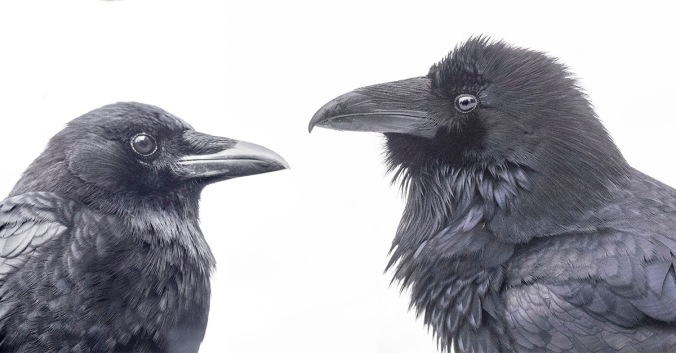 How can you tell if it’s a crow or a raven?

This is a question that often comes up in my email and social media.

There are a lot of excellent resources to help out with this (more on these later) — but I thought I’d try my hand at the explanation too, based mostly on my own observations.

First of all, I made a special set of magnets, titled Corvid Clarity, so that you could keep a small reference guide where you’ll see it often (on your fridge or filing cabinet.)

The magnets show the first two ways I write about to tell a crow from a raven.

First of all, if you just catch a glimpse of a crow/raven mystery bird flying over you — check out the tail shape.

The raven’s tail feathers form a diamond shape, while the crow’s tail is in more of flat-edged fan arrangement.

While you’re watching them in flight, note if they’re doing more soaring or flapping.

Raven are more prone to  using the air currents for long, effortless glides, while crows tend to rely  more on flapping.

That being said — I have seen crows having a lot of fun on windy days, just riding the gusts of wind like a roller coaster.

The raven is distinguished by a rather magnificent arrangement of throat feathers — something like an very opulent cravat. 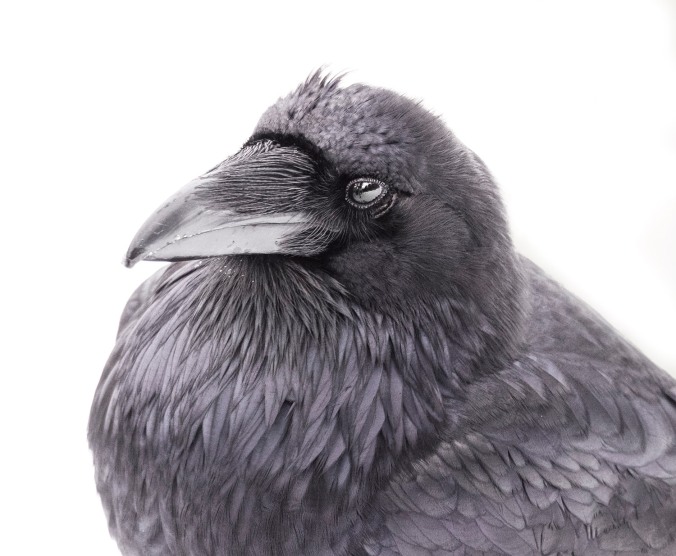 Crows, while also (of course) magnificent in their own way, are less generously endowed in the cravat department. 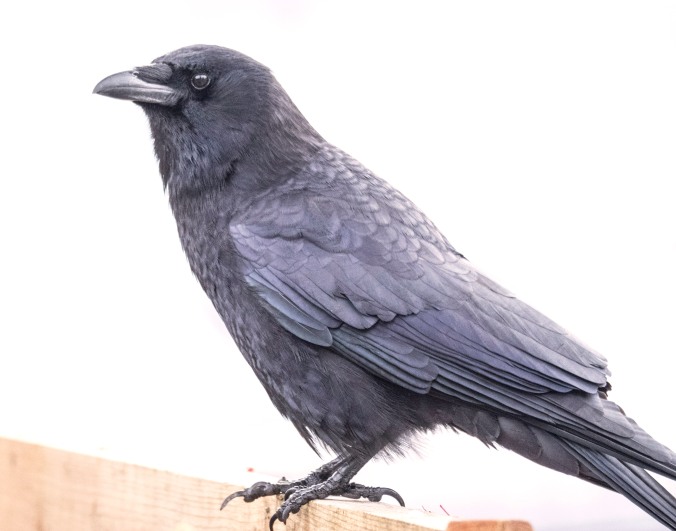 Having been unable to persuade either species to remain still while I measure them, I’ve had to rely on information gleaned from the internet here.

Unless you happen to see them sitting side by side at an equal distance from you, it’s difficult to make an identification based on size alone.

In this case the two birds were more or less the same distance away, although the crow was a bit higher up in the tree, probably making him look a little smaller.

Raven and two crows — here the crows are considerably further away, making the scale deceptive.

If you see a large black corvid being mobbed by one or more smaller ones, you can pretty much guarantee that the big one is a raven and s/he is being harassed by the crow Neighbourhood Watch committee.

In spite of their family connections, ravens will blithely raid crow nests for a tasty egg snack — putting them firmly on the crows’ “naughty list” along with eagles, hawks, racoons, squirrels, coyotes, cats and etc.

By far the easiest way to tell a crow from a raven is by the sound they make.

Crows caw and ravens have more of a croaking sound. But that’s a great simplification of their complicated call sets.

Here are just few examples to help you tell them apart:

This is probably the most common corvid you’ll hear in a city. This example is Marvin and Mavis expressing their displeasure at our cat being out on the deck.

This is another crow call, less often heard because it’s a softer, more intimate form of crow-munication.

This seems to be the most common raven call I hear, both in the city and in the mountains.

This beautiful sound is more like the crow’s rattle call – more subtle and melodic – almost like water dripping or a hollow bamboo tube being tapped.

In this clip a raven seems to be performing a jazz concert of different subtle sounds — an example of how complex corvid language is.

When it comes to confidence and attitude, ravens and crows have so much in common.

Both are highly intelligent birds — you can almost hear the cogs of their brains whirring as they work out myriad “risk/benefit” calculations when they come close to humans. 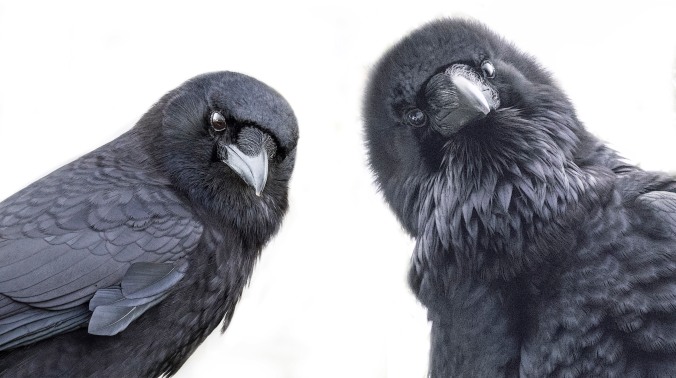 It’s really not surprising that both crows and ravens are often characterized as tricksters in stories and legends.

One of the best places to find out all about corvids is on Kaeli Swift’s awesome blog Corvid Research.  Kaeli covers every corvid related topic you can think of in her posts. You can also follow her on social media and participate in her skill-building weekly Crow or No? contests.

His books In The Company of Crows and Ravens and Gifts of the Crows, are just full of interesting information on both of these amazing birds.

Audubon: How to Tell a Raven From a Crow

Crow Gifts of All Kinds

The Colour of Crows